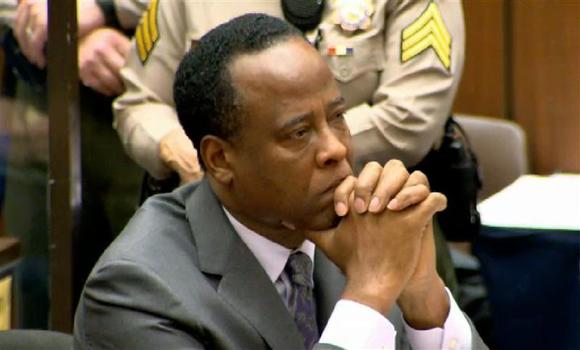 A French judge ruled on Tuesday that five Michael Jackson fans who said they were distraught over his death be paid a total of one euro in “emotional damages” by the entertainer’s doctor, who was convicted of involuntary manslaughter in 2011.

The court ruling in the city of Orleans capped a two-year struggle by a group of 30 French, Swiss and Belgian fans of the pop star for legal recognition of their loss.

Conrad Murray was convicted of involuntary manslaughter for his role in administering an overdose of the surgical anesthetic propofol, which killed the 50-year-old pop star in 2009.

Murray lost an appeal against his conviction last month but remains out of custody, having been released from a Los Angeles jail last October after serving two years.

“Dr. Murray was ordered to pay one ‘symbolic’ euro, or $1.34, and that’s what we were looking for,” the fans’ lawyer Emmanuel Ludot said.

The judge considered medical records submitted by the fans before making the decision, Ludot said.

Ludot said the ruling would be communicated to Murray – who did not attend hearings and was not represented by a lawyer – via diplomatic courier, adding: “But the fight is not about claiming the sum of one euro.”

Two of the five fans awarded the payout are French.

Under French law, plaintiffs can bring a case against another party who is neither French nor resides in France as long as they themselves are a citizen.

Ludot said all parties in the proceedings, from the judges and lawyers to the French media, had found the case amusing.

“I respected the suffering of the plaintiffs, but the process wasn’t easy because of all the sniggering,” he added.

Greece has been a popular vacation destination for years and although the economy has been giving everyone a hard time, it doesn’t seem to affect Greece that much. So expect the trains to be crowded and ferry tickets to be sold out weeks in advance.

Especially if you traveling for vacation in Greece in July and August, make sure to book you flight and train tickets/passes in advance. The majority of international travelers will book a flight to Athens. The capital is very well connected to the rest of the country by planes, buses, trains and ferries.

More and more travelers choose the train to travel to Greece. There are a lot of rail passes which include Greece and all are very popular so make sure to get yours about 90 days in advance.

If you plan to take the ferry in Greece and the popular islands – such as Mykonos, Santorini, Rhodes or Crete – are on your itinerary, it’s a good idea to book your ticket online, in advance. Some of the routes are sold out weeks in advance, especially if there’s a high speed ferry available.

During the summer, expect the weather to be hot. Over the past years, the annual temperature has been rising all over Greece (and the forest fires are good proof) therefore you can leave the wet gear at home. So be prepared for the high temperatures. Bring sun screen with high sun protection factor and wear it even when you go out for a walk, not only when you spend time on the beach. Make sure to have bottled water with you all the time.

And if you need to cool down, the (cold) orthodox churches are an excellent place to catch your breath. You can always check out the (air conditioned) stores when it gets too hot to walk outside.

Combining a luxurious environment with first-rate amenities, the Mykonos Grand Hotel & Resort features an outdoor pool, a steam room and a jacuzzi. It offers panoramic ocean, sea and bay views and 5-star rooms.

The Mykonos Grand Hotel & Resort facilities include a sauna, conference room(s) and a beauty centre. Facilities include a kids pool, a 24 hour reception and a business centre. Guests can stay connected with the resort’s standard Wi-Fi access. Rooms at the Mykonos Grand Hotel & Resort offer a stylish space to relax in, complete with a mini bar and an i-pod docking station. Amenities featured in the rooms include a plasma / LCD TV, cable / satellite channels and a safe. As standard, all rooms include air conditioning and also feature a DVD player and complimentary toiletries.

Mykonos Hotel Santa Marina Resort & Villas, is a distinguished member of The Luxury Collection, Starwood Hotels & Resorts, is a paradise within a paradise.

Nestled on a secluded peninsula over the magical blue of the Aegean, complete with its own private beach, excuisite restaurants, infinity pools, tennis court, gym and a lotus spa, this beachfront resort is just 3km away from the lively Mykonos town. Nowhere in Mykonos will you find a more glamorous lifestyle,  the exclusivity of a unique private beach, greater comfort or natural beauty than at Mykonos Hotel Santa Marina Resort & Villas Resort.  Relax on the private deck of your spacious suite before stealing away to the tranquility of your room to experiencing ultimate relaxation while enjoying the authentic “philoxenia” Greek spirit and drinking in the fantastic scenery.